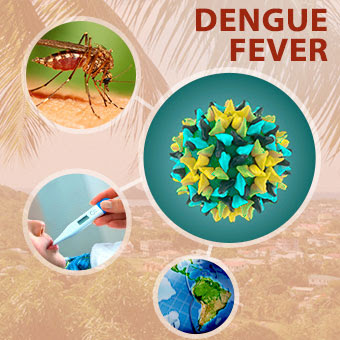 # Dengue fever is a disease caused by a family of viruses that are transmitted by mosquitoes.


# Symptoms of dengue fever include severe joint and muscle pain, swollen lymph nodes, headache, fever, exhaustion, and rash. The presence of fever, rash, and headache (the "dengue triad") is characteristic of dengue fever.

# Dengue is prevalent throughout the tropics and subtropics.

# Dengue fever is caused by a virus, and there is no specific medicine or antibiotic to treat it. For typical dengue fever, the treatment is directed toward relief of the symptoms (symptomatic treatment).

# Papaya leaf extract can be used to treat dengue fever.

# The acute phase of the illness with fever and muscle pain lasts about one to two weeks.

# Dengue hemorrhagic fever (DHF) is a specific syndrome that tends to affect children under 10 years of age. This complication of dengue causes abdominal pain, hemorrhage (bleeding), and circulatory collapse (shock).

# The prevention of dengue fever requires control or eradication of the mosquitoes carrying the virus that causes dengue.

# A vaccine for dengue fever was approved in April 2016 for use in dengue-endemic areas.

Dengue infection is a leading cause of death and sickness in tropical and subtropical parts of the world. Dengue hemorrhagic fever is a more serious form of dengue infection.

Primary symptoms of dengue appear three to 15 days after the mosquito bite and include high fever and severe headache, with severe pain behind the eyes that is apparent when trying to move the eyes. Other associated symptoms are joint pain, muscle and bone pain, rash, and mild bleeding. Many affected people complain of low back pain. The lymph nodes of the neck and groin may be swollen. Young children and people infected for the first time typically have milder symptoms than older children and adults.

Dengue hemorrhagic fever starts with the typical signs and symptoms of dengue as described above. The fever lasts from two to seven days. After the fever begins to abate, symptoms occur that are related to increased permeability of the capillary blood vessels. These symptoms can include severe abdominal pain, prolonged vomiting, and breathing problems. Bleeding tendencies, including easybruising, nosebleeds, bleeding gums, skin hemorrhages, and even internal bleeding may occur. The disease may progress to failure of the circulatory system, leading to shock and death.
Causes of dengue fever

Dengue is caused by one of four dengue viruses (dengue virus types 1-4 or DENV 1-4) that are transmitted by the bite of an infected Aedes aegypti mosquito that has previously bitten an infected person. In the Western Hemisphere, the Aedes aegypti mosquito is the most common transmitter of dengue infection; transmission by the Aedes albopictus mosquito bite has also been reported.