She Wouldn't Be the Same Person Without MS: Briana’s Story 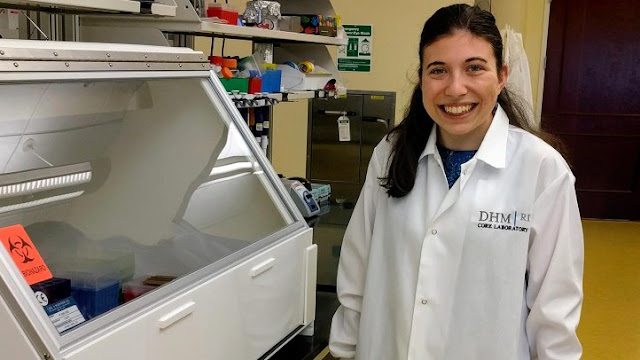 It's not always easy to look on the bright side of having multiple sclerosis (MS), but for Briana Landis, a negative moment is a moment of productivity lost forever.

A biology major in her junior year at Meredith College in Raleigh, North Carolina, Landis, 19, spent the summer interning at Discovery MS, a nonprofit endeavor at the David H. Murdock Research Institute on the NC Research Campus in Kannapolis, North Carolina. The project aims to advance the understanding of the origins of MS and improve diagnosis, predict disease progression, and assess treatment efficacy.

Landis didn't just hang out and observe, but participated in two major projects. First was helping develop a survey for people with MS that evaluates the impact of both environmental and genetic factors. The second was collaborating on a genotyping program that banks blood and DNA samples from people with MS and those without.

"This is so important, because 200 genetic factors have been shown to cause MS," Landis says. "I always wanted to be a doctor, but now I have a real passion for research."

Kids Do Get MS

Landis has always known life with MS and can even remember her first symptoms.

"Every single day in preschool I would say, 'My head hurts,'" she says. When her eyes were finally checked, she couldn't see the biggest letter 'E' on the vision chart. An exam revealed a swollen optic nerve in her right eye.

Later, after a spinal tap and two MRIs, she was diagnosed with acute disseminated encephalomyelitis (ADEM), a brief but intense attack of inflammation in the brain and spinal cord, and occasionally of the optic nerves, which damages the nerves’ protective myelin.

Doctors told her parents, "It will go away in a year. We've told you kids can't get MS."

But while Landis’s eyesight did return to normal as predicted, one year later at age 4, she was diagnosed with relapsing-remitting MS.

Advocate and Fundraiser From Early On

Just as she has had MS from an early age, so did Landis start raising awareness and funds for MS on the young side. At age 8, she was one of the winners of the now-defunct Kohl's Kids Who Care Scholarship program, receiving a cash prize and designating a charity to also receive one. She directed the funds to the former Montel Williams Foundation, started by the television and radio personality and actor, who was diagnosed with MS in 1999.

Her Kohl's achievement also landed her on the Montel Williams Show, which ran from 1991 to 2008. She remembers going blind in her right eye right before her show appearance. "That hasn't happened since," she says with relief.

"My life is pretty normal, and now that I'm older, I find my symptoms are stress-induced," Landis says.

One of the most unpleasant is the sensation that bugs are crawling all over her back, which she manages by taking the anti-convulsant drug Neurontin (gabapentin). She also has the occasional migraine — and when she does, it's "big," she says.

She also credits running with helping her manage MS symptoms, and while at A. L. Brown High School in Kannapolis she was a long-distance and cross-country competitor. "My whole family runs,” she says.

After a long day of staring through a microscope, Landis likes to stare at a needle and thread. "I love to sew," she says. "I made all the pillows for my dorm room and bedroom. My sister and I also made blankets for our family."

She also goes to Zumba classes and lifts weights with Caramia at the gym. At college she hangs out with her "amazing friends," and then finds a quiet corner in which to read, another favorite pastime.

Landis is a member of the Meredith Student Government Association’s Executive Board and the Election Board, and works part time in the university president's office. Back in the lab, she's pursuing her own research on probiotic supplements and their interaction with the gastrointestinal tract.

She says that while she's intent on staying positive, she's also realistic. That translates to high energy to pursue new breakthroughs that yield new treatments, Landis says. She's on a mission, and she's just getting started.