Former Congresswoman With MS Speaks Up for Affordable Insurance 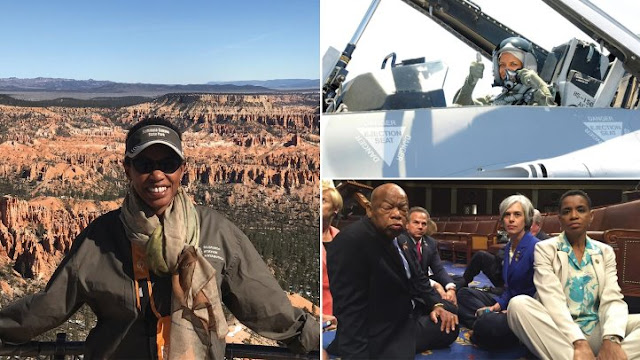 When Donna Edwards runs, she runs hard, whether it's for office or for fitness. There's no halfway or "maybe" about anything she takes on.

Edwards, 59, was the first African-American woman elected to represent Maryland in Congress. She served five terms as a U.S. representative from 2008 to 2017. Then she ran for the Senate in 2016 while still casting votes and attending committee hearings in the House. She lost in the April 2016 Senate primary.

After the rigors of a hard-fought campaign, she took some well-deserved downtime. One morning while she was out for a run on the beach in the Outer Banks of North Carolina, her right leg "gave out," she says. Edwards immediately called her doctor. Because she recovered quickly without any other symptoms, they both decided the cause must have been a pinched nerve or some athletic injury. Nonetheless, she went in to be checked out after returning home from the beach.

Edwards was very tired, but she had plenty of reasons to be, and all her diagnostic tests were normal. However, a week later, while on a 10-mile bike ride, she fell off her bicycle and sprained her ankle. She returned to the doctor and the two decided on more tests and a consultation with a neurologist. On June 22, 2016, she learned she had multiple sclerosis (MS).

Infrequent Symptoms May Have Delayed Diagnosis

After her initial shock, Edwards put her nose to the grindstone and read everything she could find about MS from credible sources. "I didn't know one thing about it then," she says.

She sought out a highly regarded neurologist at Johns Hopkins University Hospital in Baltimore, who told her she might have had MS for 10 years without knowing it.

"It's not that uncommon not to be diagnosed," says Edwards. "Especially in the early stages of relapsing-remitting MS, symptoms may be infrequent."

The proud mother of an adult son, Edwards has always been "very healthy," she says, and realizes she simply may not have connected some incidents to encroaching MS. "I'm fortunate, as the disease at this stage is relatively minor."

Her diagnosis has required her to make some changes, the most disappointing being her inability to wear 4-inch-high heels, she says. She used to tool around Washington in them, and wore them gracefully on the campaign trail with no problem.

"Now I've got a bunch of flats and wedges that look good — but they aren't heels," Edwards says with sadness.

She's still riding her bicycle — although not a skinny-tire road bike — nearly 100 miles a week. Edwards invested in a new mountain bike with wider tires and more stability to explore a favorite trail near her home to Mt. Vernon, Virginia.

She rides indoors at the gym when the weather's bad and still does strength training. But she had to forgo her position as catcher for the Congressional Women's Softball Game, played in June to benefit young women diagnosed with breast cancer.

Three times a week, Edwards injects the MS medication Copaxone (glatiramer) to reduce relapses and slow the disease's progression. She's relieved that her latest MRI shows no advancement in the disease since the previous imaging.

On the Non-Campaign Trail

Edwards is proud that she never missed a day of work, but she knew it was time to take a break.

When her House term ended on January 3, 2017, she decided to hit the road in style in a 25-foot RV. She visited 27 states in three months, logging more than 12,000 miles, meeting and talking to people just as she had while on her own campaign trail and while campaigning for Hillary Clinton. She also made time to bike, hike, and fish.

Travel was nothing new to Edwards, who grew up in a military family, and she relished the opportunity. "On this trip I visited big towns, small towns, and diners anywhere I could find them," Edwards says. "I talked to people who didn't share my politics — some knew I'd been in politics and some didn't."

Since returning to Washington, DC, she's been writing as a senior fellow at the Brennan Center for Justice at New York University School of Law in New York City. Although she's still seeking "a broad range of civic engagement," her area of specialty at the center "is to work toward a more free and fair election system and equal justice for all," she says.

She also hasn't ruled out another run for office, but it won't be for another seat in the big-domed white building in Washington — at least not right now.

Don't Take Away Our Insurance

Edwards wrote an op-ed for the Washington Post on July 7, 2017, titled, "To My Colleagues in Congress: I Have MS. Don’t Make My Insurance Unaffordable." It was a poignant plea to lawmakers not to penalize people with preexisting conditions such as hers.

She concluded her essay with a request that Congress "remember that I was one of your colleagues, that I worked hard, and that I don’t have a preexisting condition because I was a bad person who led an unhealthy life. I have a preexisting condition simply because I do; and I, like millions of other Americans in the same situation, deserve quality, affordable healthcare."

She says, "People should also be able to talk about having illnesses like MS without fear of losing their jobs." Edwards received thousands of supportive email messages and posts on Facebook and Instagram, thanking her for speaking out about the issue.

The experience has been "really amazing, speaking on others' behalf and reminding everyone that 'I have MS but it doesn't have me,’" Edwards says.

She adds, “Always remember that everyone's MS is different. Don't allow yourself to be judged by how someone else handles their condition, and don’t judge others."