Write It Out! Journaling for People With MS 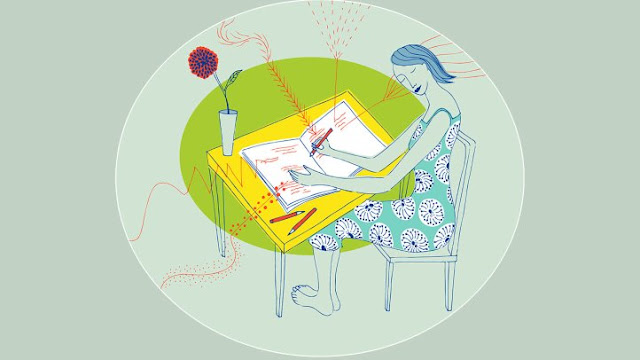 Mark Lumley, PhD, director of the clinical psychology doctoral training program at Wayne State University in Detroit, studies how journaling — also known as expressive writing — can impact a person’s physical and emotional health. He has conducted numerous studies on populations with chronic disease or increased stress.

Dr. Lumley’s research has borne out that people who write three to four times a week about difficult emotional topics — preferably things that have not been shared before — are a little better off than those who write about neutral topics.

But these are academic findings, where variables like time spent writing and subject matter are tightly controlled.

In the real world, the health and emotional benefits of journaling are likely to be stronger, because just taking time out to write and to think about your life and experiences may improve your outlook.

Writing About Stress Reduces the Stress

While the effects of journaling have not been extensively studied in people with multiple sclerosis (MS), clinical and health psychologist Peggy Crawford, PhD, of Cincinnati, Ohio, believes it can be of benefit.

There are many ways people with MS can journal, including on their own, as part of a writing or therapy group, via a blog, or in an online forum.

Regardless of where or how a person journals, “Ultimately, I think the goal is for people to have a chance to get good vibes, get their feelings out, and organize through thinking — for people to feel better,” Crawford says.

In general, experts advise that writing about neutral topics — such as what you ate that day or what the weather was like — does not have any benefit on health. On the other hand, writing about things that are traumatic, have caused conflict, or are stressful can be very beneficial.

While it is unclear why writing about stressful topics helps someone’s health or emotional state, Crawford says: “I think what it does is it sort of releases it, and it kind of gets it out, so that people spend much less time ruminating about it.”

“There’s a lot of evidence that having to block things from coming out of your mouth or having to try to keep things out of your mind is unhealthy,” Lumley notes.

And for people who have talked and talked about their trauma, but still wrestle with it, “there’s usually a piece of understanding or meaning-making that is missing,” Lumley says, “So they have to do some more cognitive work, and one of the ways you make sense of life is to try to put it into a narrative.”

Benefits of Sharing Your Writing

When she ran writing groups, Crawford encouraged participants to create a written metaphor for their MS. One participant wrote, “My MS is a thief in the night — the robber at the door. It sporadically and randomly steals my confidence in my physical and mental self that I’ve taken for granted and only recently begun to realize.”

Crawford printed off copies of the metaphors and handed them out to newly diagnosed group members.

“‘Oh my gosh,’” she recalls one member saying after reading it, “’this person actually knows what it’s like. They’re talking my language.’”

There was no requirement in Crawford’s group for people to share their writing — although most people eventually did — and it's fine to recognize that you're not up for sharing, she says.

Still, sharing one’s writing and receiving feedback from others can be comforting and eye-opening. It can also make you vulnerable and give others the chance to support you and help you see a new perspective.

In one exercise, the participants were asked to complete a pie chart of their lives, in which they listed their various life roles (including “person with MS”) and the percentages of the pie each took up. One woman’s pie showed MS taking more than 50 percent of the space.

When Crawford shared the pie charts (without identifying information), everyone in the group immediately knew which woman’s graph it was.

The woman came back the next week better for the feedback, which she said was the best she had ever received. She said she had no idea that she was making MS such a huge part of her life, and set about to change that.

How to Journal so It Helps

If you’d like to try journaling, think about expressing something personally difficult, Lumley suggests, and try to include in the writing how you make sense of the events you’re writing about.

Expressing without reflecting — some may call it venting, ruminating, or complaining — is not as helpful, Lumley says.

If you find yourself ruminating about the same old worries or fears, try to find a new angle for writing about them. For example, write down something you have not yet revealed, or try to find the positive in something, Lumley says.

This type of writing can be tough. “It’s risky to write about your thoughts and feelings,” Crawford says, “even to acknowledge them to yourself.” A person may realize they are worse off than they thought, or more depressed.

Most people feel a little worse after journaling about a difficult experience, Lumley confirms. But take heart that it's a sign you're accessing something important.

“It’s part of a change process that leads to probably a better mood in the long run,” Lumley says.

How to Feel Safe Sharing Your Writing

Sharing your writing with others and receiving feedback is also important; otherwise, you may stay in a vicious cycle, Crawford says. If you open up to others, you may worry about being judged, but in her experience, when people shared in group, they identified similarities and ended up feeling much less alone.

“I think sometimes what happens is that when people share what they write, other people ask them questions that then get them thinking about something in a different way, which is to some extent what happens in therapy,” she says.

”It is also useful to see yourself as someone who others can share with,” Crawford adds.

So think about sharing your writing with someone you trust, or consider joining an online group or seeing a mental health professional, Crawford suggests. Just the act of disclosure can be incredibly helpful.

“There’s actually a benefit to knowing that somebody else knows your secret,” Lumley says. “It reduces shame.” But be careful not to turn to someone who will criticize you or provide negative feedback.

If you can’t find someone with whom you feel comfortable sharing your writing, try reviewing the entry yourself later. You might come away with a different impression that can be helpful after getting some distance.

If, after journaling for a while, you get to a point where you have exhausted emotionally difficult topics, consider writing about what you learned from the day or how you have grown, Lumley suggests. Other journal entries could be about voicing a response to an interaction you had during the day to which you did not respond at the time.

For all the benefits of journaling, there are times to stop, Crawford says. If the thoughts and feelings you are writing about become too distressing, stop.