Is a Biologic Medication Right for My Psoriasis? 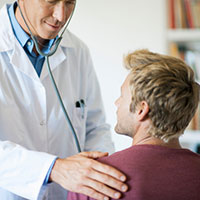 Although psoriasis treatments are personalized, first — and even second or third — efforts may not be enough to conquer itchy, painful, and unsightly psoriasis symptoms. That's when it may be time to consider biologics, a powerful class of drugs used to treat moderate to severe psoriasis.

Introduced about a decade ago, these medications work by blocking the action of substances in the body that cause psoriasis symptoms. But biologics aren’t for everyone. Here’s how to find out if a biologic medication may be a good treatment option for you to discuss with your doctor.

In general, the more severe your psoriasis, the more likely you are to be prescribed a biologic drug. People with just a few small patches of psoriasis on their body can often relieve their symptoms with milder treatments like topical creams, but if psoriasis affects large amounts of skin, it usually needs something stronger.

“But there are exceptions to who’s right for biologic treatment,” says Abby Van Voorhees, MD, an associate professor of dermatology and director of the Psoriasis and Phototherapy Treatment Center at the Hospital of the University of Pennsylvania in Philadelphia. “People with psoriasis on their hands or feet for example, may be unable to walk or use their hands for simple tasks, so more aggressive treatment is warranted.”

A biologic medication may also be recommended for someone who has psoriatic arthritis along with psoriasis because the drug can treat both conditions. However, having other illnesses may make taking biologic medications too risky. If you have congestive heart failure, for example, you shouldn’t take certain types of biologics.

Because biologic drugs suppress the immune system, they also aren’t recommended for people whose immune systems are weak because of cancer treatment or a disease like the human immunodeficiency virus (HIV). People with active infections can't take biologics until the infection has cleared.

If you're pregnant or trying to become pregnant, you'll also need to use caution when considering a biologic medication. Most biologic drugs are considered class B, which means that animal studies of the drugs haven’t shown a risk to the fetus, but there have been no well-controlled studies in humans.

Certain biologic medications are recommended for moderate to severe psoriasis because they’ve been shown to be effective at clearing up itchy, scaly skin. For many people, taking a biologic also results in fewer side effects than other psoriasis medications, such as methotrexate and cyclosporine.

“Cyclosporine raises blood pressure over time, and it’s hard on the kidneys, so you have to stop taking it for a while,” says Janet Prystowsky, MD, a dermatologist in New York City. “And some people have needed liver transplants from taking methotrexate too long.”

Because biologic drugs are administered infrequently — anywhere from twice a week to once every few weeks — they can also be an option for people with psoriasis who are busy or who have trouble remembering to take daily medication.

Although biologic medications can be effective at relieving psoriasis symptoms, some people find that they stop working after a certain period of time. When this happens, switching to another biologic drug of the same class may be an option.

Because most biologic drugs are given through an injection or intravenous (IV) infusion, they may not be good treatment options for people who are afraid of needles. However, many people become accustomed to the process.

Another drawback of biologics is the cost. A year’s worth of biologic drugs can cost thousands of dollars, so people without health insurance or those whose insurance covers little or none of the cost may find the medication too expensive.

“In these cases, pharmaceutical companies may have a financial assistance program that can help,” says David Bank, MD, a dermatologist in Mt. Kisco, N.Y.

The decision to treat psoriasis with biologic medications is one that must be made by both you and your doctor together. Although they may not be appropriate for everyone, a biologic drug can be an effective option for the right candidate.