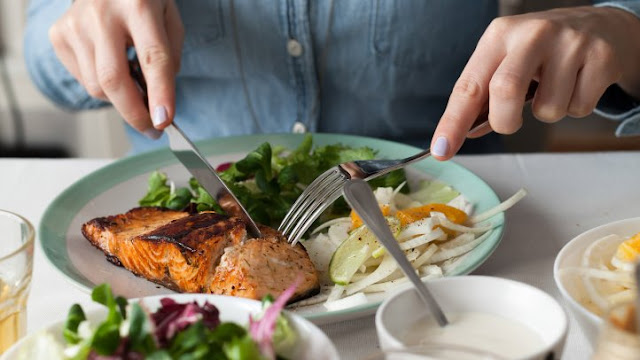 Finding reliable information about what to eat can be frustrating for a person with multiple sclerosis (MS).

“To date, no study has been published that shows diets influence disease progression in multiple sclerosis,” says Dave Bexfield, founder of the online MS community ActiveMSers.org, who was diagnosed with MS in 2006.

“In the 10 years I’ve run ActiveMSers, no one has written me gushing about symptoms reversing because of a diet, but I’ve gotten many pained emails wondering why a certain diet hasn’t worked,” Bexfield says.

“There is no special MS diet,” concurs Joey Gochnour, a registered dietitian nutritionist and owner of Nutrition and Fitness Professional in Austin, Texas.

In multiple sclerosis, the immune system mistakenly attacks the myelin sheath — the protective coating on nerves — disrupting nerve activity. It can have a broad range of effects, including fatigue, weakness, difficulty walking or seeing, problems with swallowing, bladder control issues, constipation and other bowel changes, as well as emotional and cognitive changes, among others.

Each person with MS deals with a unique set of symptoms, which are likely to change over time. The unpredictable nature of the illness makes it challenging to generalize nutrition recommendations and advice.

“Many people with MS struggle with the same types of diet challenges as the rest of the population — including obesity and a sedentary lifestyle — but add to that a condition that affects different aspects of life for different people,” Gochnour says.

Like everyone else, people who have MS can benefit from a healthy diet — with modifications to fit their symptoms and lifestyles.

The majority of people with multiple sclerosis experience fatigue that can interfere with daily activities.

Some find that following a balanced diet helps to increase their energy level. Generally speaking, this means eating sufficient calories — but not too many! — from a mix of lean proteins, whole-grain carbohydrate sources, and healthy fats (from fish, nuts, seeds, and oil).

“There isn’t necessarily one food that gives us more energy,” say Jennifer and Dan Digmann, a married couple who both live with and blog about MS, “but concentrating on an overall healthy diet (fruits, vegetables, protein intake, and drinking more water) gives us more energy.”

Nicole Lemelle, who was diagnosed with MS in 2000 and writes the blog My New Normals, uses wholesome foods to keep her going throughout the day. “Egg whites, whole-grain breads and bagels, and cereal for breakfast help me sustain my morning potency until lunch,” Lemelle says. “I eat almonds and cashews as a snack when I need a boost between meals.” Coffee also helps Nicole battle her fatigue.

After six years of struggling with MS, Meagan Freeman, who was diagnosed in 2009 and blogs at Multiple Sclerosis, Motherhood, and Other Traumatic Experiences, made a drastic change to her eating habits and became a vegan, avoiding animal foods completely.

“When I switched to a purely plant-based diet, I noticed an immediate improvement in my fatigue,” Freeman says. “I had dramatically higher energy levels within a few weeks. I had less bloating and fatigue after meals, and I had a sustained energy increase throughout my day.”

Freeman says the difference was amazing. “I had been struggling with fatigue and general weakness for years,” she says, “so these symptoms were some of my most bothersome. I had days where I spent the day on the couch or in bed and was unable to participate in my life. Since adopting the vegan diet, I have not had a low-energy day.”

The challenges posed by MS can make it tough to maintain a healthy weight.

“Some people with MS have trouble moving due to the condition or are depressed because of it,” Gochnour says. Mobility challenges or mood disorders that make exercise difficult and reduce energy expenditure often lead to weight gain.

Difficulty shopping and preparing meals may also lead a person with MS to rely more on processed, ready-to-eat foods or takeout, which are often high in calories, sodium, and fat and low in nutritional value. In fact, some research has suggested that malnutrition is not uncommon among those with MS.

Still, people with MS can maintain a healthy weight and lose weight if necessary by controlling portion sizes and cutting down on junk food and eating out.

“I have lost 75 pounds since I was diagnosed,” she says, “and I’m still trying to lose weight. I have tried to cut out fast food, eat more fiber, and drink more water. It is especially important for me to watch my weight because I no longer walk.”

Moving toward a plant-based diet — not necessarily vegan, but one that incorporates more plant foods and fewer animal products — may also promote a healthy weight. In a study published in Multiple Sclerosis and Related Disorders in September 2016 in which 22 people with MS followed a very-low-fat, plant-based diet for 12 months, participants lost just over a pound a month, on average.

Plant proteins like beans, tofu, seitan, nuts and nut butters, and seeds are rich in nutrients yet lower in calories and saturated fat than animal proteins — traits that can assist with weight control and promote wellness. Plant foods — particularly grains, beans, fruits, and vegetables — are also good sources of dietary fiber, which promotes fullness and bowel regularity and helps reduce calorie intake.

For those not used to vegetarian meals, it may be helpful to start with one meatless dinner each week. The website Meatless Monday is a good resource for vegetarian and vegan recipes and meal ideas. A registered dietitian can also help you learn about healthy food options that are easy to prepare.

Many people with MS have learned through trial and error that some foods worsen — or ease — specific symptoms.

For example, because getting overheated can worsen symptoms of MS (that’s why many people with MS avoid taking hot showers or baths), food temperature may be an issue. Bexfield finds that hot soups will temporarily sap his energy, while a cold treat — such as a popsicle — can help him stay cool.

A rarer MS symptom, trigeminal neuralgia, which causes sudden severe facial pain, can make eating difficult. When Jennifer Digmann was struggling with this pain, “I found that softer, plainer foods such as breads, potatoes, and cottage cheese were easier to eat,” she says.

For constipation — another common problem for those with MS — getting adequate fluids is key, as is choosing higher-fiber fruits, vegetables, and grain products.

“We both have consciously increased our water and fiber intake to better alleviate issues with constipation,” says Jennifer Digmann, referring to herself and her husband.

Certain nutrients have been touted for their potential benefits for people with MS.

Omega-3 Fats Diets high in omega-3 fatty acids may help to prevent multiple sclerosis and provide other benefits for those who have the condition.

A study published in Multiple Sclerosis Journal in June 2016, for example, found that higher intakes of omega-3 fats, particularly those derived from fish, are associated with a lower risk of having a first clinical diagnosis of central nervous system demyelination, indicating a high risk of MS.

Another study, published in the journal PloS One in August 2016, found that use of plant-based omega-3 supplements, such as those containing flaxseed oil, was associated with a lower relative risk of major disability in people with MS.

The National Multiple Sclerosis Society currently recommends discussing omega-3 supplementation with your doctor before trying it.

Omega-3 fatty acid supplements can interact with anticoagulant medications (blood thinners) as well as with insulin and oral drugs for diabetes and high blood pressure. Little is known about the safety of combining omega-3 supplements with MS medications.

Instead of taking supplements, a more moderate approach to increasing your intake of omega-3s is incorporating fatty fish, canola oil, flaxseed, and walnuts into your diet on a regular basis.

Vitamin D This fat-soluble vitamin — which the body can produce in the skin with sun exposure — plays a role in regulating immune activity. Because MS seems to be more common in areas with less sunlight, researchers have suggested that vitamin D may protect against developing MS.

“The National MS Society has reviewed the research on vitamin D and MS and has found an increased risk of developing MS with lower vitamin D levels,” Gochnour says. “However, research is still controversial on how much vitamin D is needed, and how effective supplementing vitamin D is while already having MS.”

Nonetheless, an individual with MS may be deficient in vitamin D, and correcting low levels can be beneficial to health even if it doesn’t have a direct effect on symptoms.

“Have your vitamin D levels checked before supplementing,” advises Gochnour, and discuss whether and how much to supplement with your healthcare provider.

Since medicine and nutrition are constantly evolving fields, it’s important to keep an open mind about what might help and what will never work.

At the same time, be wary of regimens or “cures” that sound too good to be true.

Because MS is so individualized, Lemelle cautions, “A diet that helped someone else may not work for you. While there are general rules, which aid in good nutrition, there is no one-size-fits-all diet. It’s best to consult your physician and registered dietitian when making a plan. They will base a regimen on your symptoms and your type of multiple sclerosis.”