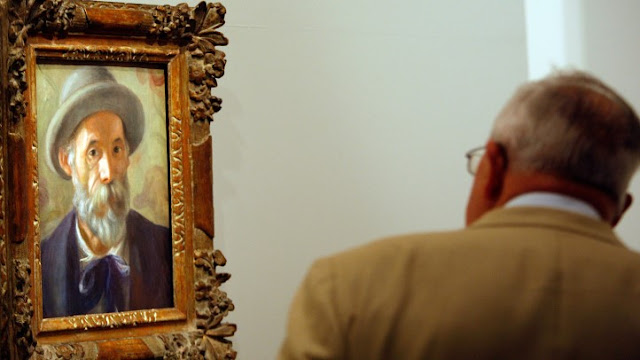 I recently asked someone — someone whom I credit with knowing a lot about everything — if he knew that Pierre-Auguste Renoir had a chronic, disabling disease. He did not know. That appears to be the consensus: During his lifetime, most people did not know that Renoir had rheumatoid arthritis (RA), and it remains a little known fact today.

Renoir was a famous French Impressionist artist of the 19th century. His works were not reflective of his disease or pain or despair. On the contrary, Renoir’s masterpieces reflected his optimistic spirit and the beauty he saw in the world, whether it was derived from what he observed in nature or on the faces of beautiful, happy people.

Renoir was born in 1841 and died in 1919. He was married to Aline, who died in 1915, and they had three sons. Renoir began as a porcelain painter, which helped him pay for art school. Throughout his career, he was famous for painting what he was feeling and not allowing a subject or scene to impose on that feeling. That he was able to harness such positivity, despite having RA, makes his story even more extraordinary.

The Course of Renoir’s RA

There is some uncertainty about when Renoir first developed RA. Some say 1892, while others have tagged it at 1898, but we can conclude that he was around 50 years old. There is evidence in some photographs of hand involvement from RA when he was 55 years old, according to research published in the journal The BMJ. Renoir’s RA became more aggressive as the years went by, and by 1903, when he was 62 years old, dramatic deformities were evident in his hands. He also had destruction and ankylosis of his shoulders and elbows, as well as ruptures of extensor tendons of the fingers and wrists.

In 1901, at 60 years old, Renoir was using one walking stick. By 1908, he needed two walking sticks or canes to get around. In 1912, there were reports of paralysis, likely due to involvement of the cervical spine, and he could no longer walk. From that point on, he used a wheelchair. Deformities also affected his feet and he stopped wearing shoes in favor of woolen slippers. Renoir’s RA, at various times, was characterized by pleuritis, facial palsy, rheumatoid cachexia (severe weight loss), nodules on his back and elbows, and even bouts of bedsores. In 1919, he developed and succumbed to pneumonia. But on the day he died, he had still painted during the evening hours.

Two doctors prescribed “purges and antipyrine” to treat Renoir’s RA. While he reportedly did follow their advice, Renoir was leery that antipyrine (a pain reliever) would affect his creativity, so he used it sparingly. He was more focused on exercise, especially for his arms and hands. He played games, such as billiards and bilbouquet — a device with a cup or spike at the top of a stick, attached to a ball on a string; the intent is to catch the ball in the cup or on the spike.

He also juggled. For warmth, he visited French spas, dressed warmly with hats and shawls, and was often seen holding a cat.

Renoir Was Forced to Adapt

Renoir’s masterpieces, as well as his positive outlook on life, are tremendously impressive without even factoring in that he had RA. When we consider that he did indeed have RA for the last third of his life, it is nearly unbelievable. As someone who has lived with RA for over 40 years, I can attest that his persistent positivity is as inspiring as his art.

That is not to say that Renoir never experienced depression, but he overcame it and persevered — no easy feat with RA. Because Renoir was so extraordinary, it may seem odd that few really know his story. But he wasn't focused on his health problems in any sort of public way — not by complaining or self-pity. He was focused on overcoming problems and living life.

Most people are unaware of the numerous adaptations that Renoir had to make so he could continue painting. At one point, his brushes had to be fixed in his hands. His wife or a model helped him with that. He could not hold his palette either, so he balanced it against the easel using his knees.

Move the Canvas Instead of the Artist

As described in an article published in December 2012 in the journal Hand, Renoir also invented a moving canvas that replaced his easel. A linen was attached to wooden slats which turned on spindles that were connected to a chain from his old bicycle. By using that, he was able to move a canvas up and down and still create very large paintings. This compensated for his inability to get up and down by himself easily, and for limitations with his arms and shoulder.

Remarkably, it has been said that some of Renoir’s best work was created when his RA was at its worst. Another remarkable fact is that he added sculpting to his artistic endeavors. When he was no longer able to sculpt himself, he directed assistants to achieve what he had in mind.

In the nearly 60 years Renoir actively created art, it is estimated that he painted 6,000 masterpieces. Renoir once said, “For me a picture has to be something pleasant, delightful, and pretty — yes, pretty. There are enough unpleasant things in the world without us producing even more.” A timeless quote, for sure!