In the Spotlight With Psoriasis: Lauren’s Story 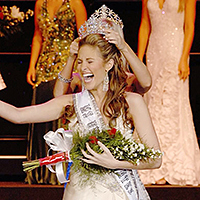 Winning the Ms. United States beauty pageant in 2007 was a dream come true for Lauren Wanger. “I remember feeling overwhelmed with disbelief and excitement. It was truly a monumental moment for me,” says the 32-year-old from Boca Raton, Fla. But beneath the glittering crown and dazzling gown was a rather unglamorous condition: psoriasis.

Wanger was diagnosed with psoriasis years earlier, when she was a teenager. She’d noticed two strange patches on her leg and went to a dermatologist for answers. Others noticed her skin problem, too, which made her feel self-conscious.

“For many people, having psoriasis can have a large impact on their sense of self,” says Abby Van Voorhees, MD, director of the Psoriasis and Phototherapy Treatment Center, an associate professor of dermatology at the Hospital of the University of Pennsylvania in Philadelphia, and chair of the National Psoriasis Foundation Medical Board. “People with psoriasis often mention that they’ve felt a need to adapt their personal and work lives as a consequence of having the condition.”

Although she also felt this stigma, Wanger didn’t want her skin to hold her back. “I thought about it, and I knew having psoriasis wasn’t ideal, but it never stopped me from doing anything I wanted to do,” she says.

Psoriasis did sometimes make competing in beauty pageants challenging. “I had psoriasis outbreaks when I competed. I would use makeup and spray-tanning to camouflage the spots on my skin. I never had patches on my face, but my legs were covered in them, and some were quite large. During that time, I would wear pants rather than skirts or dresses to hide my legs,” Wanger says.

Wanger turned this negative into a positive for her during a competition: “When asked by the judges about a challenge I had to overcome, I used my psoriasis as an example. I think the judges liked my answer,” she says.

Wanger won the pageant, and soon after, Hollywood came calling. She was cast on season 13 of the reality show, “The Bachelor.” “The show was stressful and I’m sure that didn’t help my skin,” she says.

During one of the group dates on the show, the bachelor, Jason Mesnick, noticed psoriasis plaques on her legs and asked what it was. “I simply brushed it off and told him I had flaws and wasn’t perfect. That was that,” she says.

The Quest for Effective Psoriasis Treatment

Finding psoriasis treatment that works can help control the condition and give you the confidence to follow your dreams. “There’s a number of effective psoriasis treatments,” Dr. Van Voorhees says. “The last 10 years or so have seen a revolution in the way this condition can be treated.”

Wanger has found different psoriasis treatments that are effective for her. “Throughout the years, my psoriasis has varied from mild to moderate. I used many different treatments such as topical steroids, medicated tapes, and steroid injections,” she says. Managing stress helps reduce her outbreaks, too. For Wanger, the best stress-busting tool is exercise. Van Voorhees says that staying at a normal weight, getting enough rest, eating well, and not smoking are critical to managing psoriasis symptoms effectively.

Wanger’s psoriasis is now almost in full remission. These days, she works out of the spotlight as a high school psychology teacher and is a single mom.

She advises others to not let psoriasis plaques keep them down, and that the key is self-acceptance. “You’re most likely your biggest critic. You have to accept who you are before others can accept you. It’s a process that’s easier said than done,” she says. Joining a psoriasis support group or getting counseling to help manage psoriasis can also help.

Wanger didn’t get that final rose on “The Bachelor,” but she's confident she’ll find her Prince Charming — someone who will accept her for the full package of who she is. “I’ve come to learn that confidence speaks volumes, so I try to wear my psoriasis with pride and not let it get me down,” she says.