Physiology of Labour. You Need to know!

Every expectant mother should have the basic knowledge about the onset of labour and the time to arrive at the hospital. Though the expected date is predetermined, hardly 5% deliver on the due date. The majority deliver either one week before or after the schedule date.

The following things which are essential for the mother and child should be packed and kept ready one month ahead of time.

3. One bottle of nourishing drink for the mother.

6. One bottle of antiseptic solution.

8. Change of clothes and undergarments for the mother.

A warning for the mothers is the rupture of the membranes. This is associated with sudden gushing of water from the vagina. This water is the amniotic fluid which surrounds the baby and protects it from infections. Once this bag is broken, the baby should be delivered within 6 hours, irrespective of whether the pains start or not. Even if this discharge is not associated with labour pains, the patient should report to the hospital immediately for prompt action.

Another important ominous sign is the decreased or absent foetal movements, in which case the doctor should be contacted immediately. In case of total loss of foetal movements indicating the death of the foetus, arrangements should be made to terminate the pregnancy at once after confirmation. 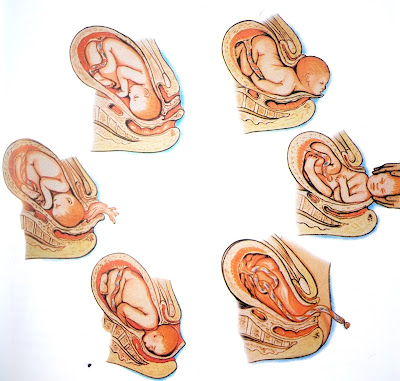 Labour pains start generally with mild uterine contractions in the beginning, which later becomes excruciating. The pain is initially felt in the front of the lower abdomen. The pain then slowly proceeds backward to the middle of the back. The true labour pains are usually accompanied by the discharge of a mucus plug per vagina which occurs due to the opening of the mouth of the uterus. As the labour pain continues, the discharge becomes tinged with blood. The pain usually occurs every 1/2- 1 hour and increases in intensity each time. These then come more regularly lasting from 45 seconds to 1 minute at 3-5 minutes interval.

The most important point I wish to emphasise upon the birth of the baby is that the patient will be able to bear the pain if accepted in the proper sense. The pain in front is caused by the contraction of the uterus, and the pain at the back is attributed to the opening of the mouth of the uterus. The first stage pain lasts for a period of 8-16 hours and during this time, a full dilatation of the cervix with the rupture of the membrances, takes place. The second stage begins with full dilatation of the cervix till expulsion of the foetus. The actual expulsion takes place over a period of 1 to 2 hours in a primi and 1/2 to 1 hour in a multigravida. The head of the baby distends the perineum just prior to delivery. A 'Primi' is a woman who is pregnant for the first time. A 'multi' is one who has borne more than 1 child; A 'grandmulti' is one who has borne more than 4 children. 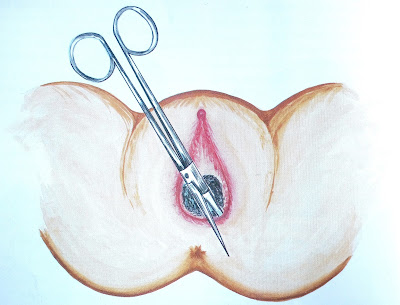 The perineum is extremely tense in a primi and the sudden dilatation of the muscles surrounding the vagina, coupled with the strain on the region for over 1/2 an hour could cause damage to the muscles, leading to prolapse or sagging of the uterus later in life, In order to prevent such a development, episiotomy or cutting of the perineum, to enable a smooth delivery is usually resorted to. This procedure also has the dual advantage of:

1. Safeguarding the baby from death due to asphyxia (suffocation) and

2. Preventing prolapse of uterus in the mother at a later date.

The third stage comprises of the expulsion of the placenta or after birth. This lasts over a period of 15 minutes to 1/2 an hour. The placenta is the spongy tissue, which is attached to the inner wall of the uterus, and this supplies nourishment to the developing foetus. The after birth gets expelled soon after the delivery of the baby.

Each of the stages mentioned above appears elementary and majority of the deliveries proceed without complication to a successful finish. There are however a few cases, which present difficulties and these can be tackled and overcome only by an experienced obstetrician.