The First Asian Baby.. Born to a patient with Mayer-Rokitansky-Kuster-Hauser Syndrome through a surrogate

Motherhood is the ultimate dream in a woman's life. to be able to experience this wonderful feeling, one has to be endowed with the female reproductive organs. i.e. 2 ovaries, 2 fallopian tubes and a uterus which will bear the fetus. 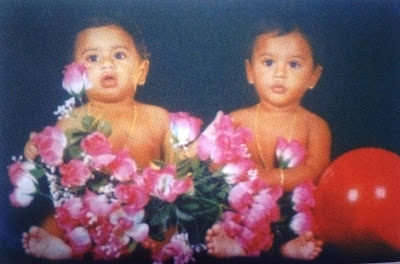 If a woman lacks any of these organs, her dream will remain unfulfilled. Normally, 90% of women have healthy and normal uterus whereas 10% of women may have some deformities. The sex of the fetus is determined by the Mullerian Inhibiting factor present in the "Y" chromosome of the Male. In the fetus, the uterus is contained in the abdominal cavity projecting beyond the brim of the pelvis. The cervix is considerably larger than the body of the uterus. At puberty, the uterus is pyriform in shape and descends into the pelvis. The ovaries and the fallopian tubes are fully developed at 22 weeks of gestation. If there are any abnormalities at this stage of the fetus's growth, there is a strong possibility of the uterus being deformed or even the absence of the uterus and the vagina. Such a syndrome is called the Mayer-Rokitansky-Kuster-Hauser syndrome.

Patients with this syndrome have deformed/or no uterus and vagina but have normal functional ovaries. Due to this condition, a female child, though physically well developed, will neither attain spontaneous menarche nor can she be medically induced to menstruate.

A lot of patients with this syndrome reported in our hospital and after a lot research, we decided to embark on a new technique so that such patients also could experience the joy of being a mother. However, this was possible only through surrogacy.

Initially, the ovaries of such patients are stimulated with hormonal injections to produce more number of eggs. These eggs are then aspirated laparoscopically through the abdomen and then fertilized with the husband's sperms. Once these embryos multiply and reach the 2-4 cell stage, they are transferred into the surrogate's uterus by Embryo transfer technique.

In our hospital, one such patient who had an absent uterus artificially constructed vagina and functional ovaries was taken up for aspirtation and 10 eggs retrieved. These eggs were then fertilized with her husband's sperms and frozen at the pronucleus stage in liquid nitrogen at - 196 degrees centigrade. Meanwhile, the surrogate was being prepared to receive the fertilized. |Once the surrogate's uterus was primed for the embryo transfer, the embryos was thawed and kept in the Co2 incubator for 24 hours. Subsequently, 4 embryos at the 4 cell stage were transferred into the surrogate's uterus. Beta Hcg done on the 11th and 13th day after the transfer proved successful pregnancy. Ultrasonography done after 9 days after the Beta Hcg (38th day of pregnancy) revealed triple gestation which was naturally reduced to twins (48th day of pregnancy).

With this pregnancy, we have been able to arrive at a conclusion that patients with this syndrome can also have their own child through surrogacy. Such a breakthrough in Asia will prove to be boon to these patients who can also now look forward to experiencing the joy of being a mother.