First of all, Puberty (Growth of secondary sexual characteristics) menarche (onset of menstruation), marriage and child birth are not diseases by themselves as some ignorants may conceive and dread. They are something physiological, natural and beautiful. Hence, they should be accepted as vital events in life without which we cannot function as a normal human being.

Menarche and puberty usually coincide. It is nothing but Nature’s signal to show that a female has reached physical maturity which will render her capable of bearing children. This certainly does not mean that she is mature mentally. Though her body is now ready for the process of procreation, her mental development may not have kept pace with her physical development. She therefore need not necessarily have attained the mental balance and understanding needed to bear gracefully the consequences of physical relationship and child bearing at this stage.

The age of puberty is usually around 12 to 16 years in a female. She is now entering the arena of womanhood, but not quite so. Everything seems to be strange to her. The transition period when a child becomes a woman, referred to usually as adolescence, is the most trying period both for the teenager and the parents. This crucial period marks the peak of belligerence and rebellion in the child. This can only be counteracted by extra understanding and demonstration of love and affection by the parents, especially by the mother. The responsibility of explaining the ‘facts of life’ in the simplest possible way without unduly alarming the child should be taken up by both or either of the parents so that the child does not get misinformed, alarmed or misled by secondary or undesirable sources. It is natural for adolescents to feel self conscious of their physical development and new body functions like menstruation. The mother should  explain these physical changes to the child in a rational manner so that the growing girl is able to adapt herself suitably to her changes. She should be convinced that all this is nothing but a part of natural “growing-up” and should not at all feel that is a ‘curse’ Which all members of the female sex have to bear. She should feel proud of her potentialities as a woman and not cringe at the thought of being subject to the various roles a woman usually plays as wife, mother etc.

In Latin puberty means ‘Bursting into adolescence’. Adolescence is the state of becoming functionally capable of procreation. Puberty is, in fact, the first half of adolescence and is characterised by physical, mental and sexual differentiation. At this stage, there is a tumultuous and beautiful onset of activity.

> There is a sudden spurt in stature.
> The breasts start to develop and become enlarged.
> There is growth of hair on the body, initially in the public region and later in the axillary region.


> Body contours change and fill out due to the deposition of fat. 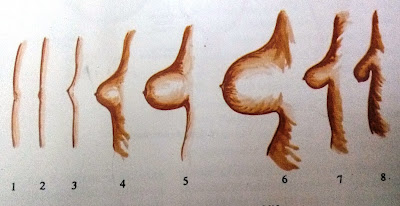 Menarche marks the onset of the first menstrual flow which is periodic, occurring in every mature girl. Normally there is a gap of two years between the onset of puberty and menarche. In India, the average age of menarche is about 13 ½ years (varying between 10-16 years). This is, to a certain extent, affected by the family environment, diet and other socio-economic factors.

There also exists a few abnormal conditions: for example, if a girl fails to menstruate within 2 years of puberty or even after 15years of age, then should beexamined by a gynaecologist, as she may be suffering from a condition called cryptomenorrhoea. In this condition the girl menstruates every month, but the menstrual fluid remains in the uterine cavity and vagina, distending them and does not get shed outside due to a completely closed hymen or vagina.

Another example is where a girl does not menstruate at all due to a developmental deformity and defective genetic chromosomal make up. Menstruation normally occurs every 28 days with two days difference either way and the flow of blood lasts for 2 to 7 days, the average being 3-5 days. The flow is initially pink in colour changing to bright or deeper red on the 2nd or 3rd day of the period. The blood may give off a faint undesirable odour due to the bacterial multiplication taking place in it. It would be hygienic to change 2 or 3 sanitary napkins per day; clean cotton or soft cloth may also be used. Vaginal tampons are also hygienic and have no ill effects whatsoever on the user, and ideally suits married women since it has to be inserted into the vagina. In virgins the intact hymen resists tampon insertion and therfore should not be used. The vaginal tampons should be replaced every 4-6 hours’ failure of which may lead to severe pelvic inflammatory disease (P.I.D). 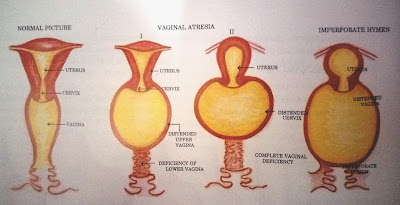 In the beginning when the adolescent girl first begins to menstruate, the menstrual cycle is usally anovulatory, i.e. the ovum is not produced. Due to this the cycles are irregular and painless and may even skip 3-6 months at a time. Erratic periods during adolescense are not at all unusual, so there is no cause for anxiety.
Some young girls have profuse periods with respect to volume as well as duration, sometimes lasting for more than a month. This usually happens in those who do not get their periods for 2-3 months. This is a type of dysfunctional uteriene bleeding (causeless bleeding) and such excessive periods should always be reported to the gynaecologists for effective treatment. If not, the girl becomes mentally disturbed and physically weak since she has lost enough blood to cause anaemia.

Most people are under the wrong impression that the blood lost during the menstrual period is bad or impure the loss of which purifies the body. It is certainly not so. It is the normal healthy blood that goes to form the baby if the girl is opportuned to conceive.

Another common misconception is that when the menstrual flow is scanty, the patient feels weak and says that she has put on weight. On the contrary, it is the heavy flow that leads to anaemia and in reality it is the mental and hormonal disturbance which has led to a reduced flow of blood and subsequent obesity. There is therefore a delicate balance between the higher centres such as pituitary and hypothalamus in the brain and the uterus and ovary in the pelvis. Even a minor psychological disturbance will upset this harmony and affect the menstrual flow. For example, a patient who is desperate to conceive, in her over-anxious state can even stop menstruating upto nine months. The woman develops a ”tummy” due to distension of the intestines which results in a typical pregnant posture. This condition is termed as pseudocyesis. She eventually goes into false labour and it is very difficult to convince such a patient about her true condition. Periods which occur very rarely or too frequently should be viewed with suspicion. 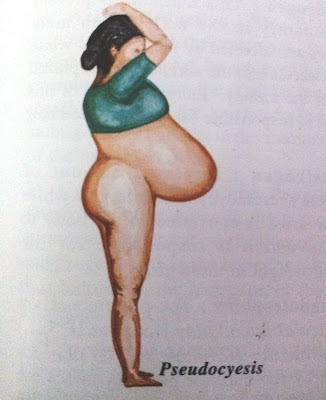 A little pain and discomfort occurs in some girls, during menstruation especially when they have been subconsciously taught that menstruation is a “Curse of Eve”. Sometimes, the pain may be severe. This pain is caused by the muscular contractions of the uterus and expulsion of menstrual blood through the cervix. The pain can be controlled by exercise, cold water bath and analgesic and antispasmodic  drugs. The pain normally subsides after delivery when the mouth of the uterus (cervix) is stretched and becomes expanded.