Is the Fat Problem for Young Women? And Why they getting Fat?

This is fairly a common condition affecting many of the young adolescent girls who present with the following features.

2. Increased hair growth all over the body called Hirsutism. This is a condition  where hair grows on the upperlip, arms and legs.

3. Increse in weight disproportionate to the height and age.

This not only upsets the young girl who is most conscious of her appearance and wants to look her best but also causes extreme worry to her mother who gets worried about her daughter’s increasing obesity, hirsutism and amenorrhoea. However due to ignorance, many parents may fail to consult a doctor till such time marriage is contemplated.

What is the condition? Why and how does it occur? What is the remedy? Now, let me enlighten the young girls on the triad of symptoms briefly in lucid language, so that one need not necessarily be upset over this. Once the condition is diagnosed, treatment becomes necessary.

Young girls, soon after menarche, gradually go into delayed menses, increased development of hair over the body and gradually become over weight. These three symptoms Amenorrhoea, Hirsutism and Obesity are due to a condition called Polycystic Ovarian Disease (PCOD).

PCOD is a condition resulting in enlargement of the ovary/ovaries due to certain changes in the endocrinological makeup of the individual. The hormones involved in PCOD are mainly:

1. Androgen:  This hormone is present predominantly in the male. Extra male hormones are secreted by the enlarged white ovary/ovaries and the adrenal glands placed on top of the kidney. Increased level of this hormone is responsible for the increased hair growth.

2. Oestrogen: Increased amount of Androgen secreted by the enlarged white ovary/ovaries is converted in the body to Oestrone which is responsible for the increased weight in these girls.

3. Gonadotrophins: These hormones are the Follicular Stimulating Hormone (F.S.H) and Leutinizing Hormone (L.H) that are secreted by the anterior pituitary under the control of Gonadotrophins Releasing Hormones (G.N.R.H) from the hypothalamus. In PCOD patients, the L.H. level is slightly increased, producing a reversal in the proportion of  F.S.H. and L.H. Leading to prolonged amenorrhoea due to the failure of ovulation.

2. Ultrasound scanning reveals a much enlarged ovary with plenty of suppressed ovulatory follicles giving the appearance of necklace.

Treatment:  There are two groups of patients and they are treated accordingly:

1. Unmarried girls with delayed periods;
2. Married women who are anxious to have a baby.

1. Weight Reduction: This is the most important part of the treatment. Successful weight reduction can be achieved by diet and exercise which burn the extra fat in the body, thereby lowering the levels of estrogen and androgen which results in the automatic return of the menstrual cycle.

Extra hair can be removed by waxing or bleaching.

The best treatment for Group I will be weight reduction and cyclical hormones.

When the question of child bearing arises, ovulation induction can easily be achieved by

The administration of these drugs for induction of ovulation must be done only after excluding all the other causes of infertility in the couple.

WEDGE RESECTION OF THE OVARIES

This is an outdated procedure where a portion of the ovary is removed surgically. It is a condemned method of treatment for PCOD after the discovery of medical induction of ovulation with modern drugs. 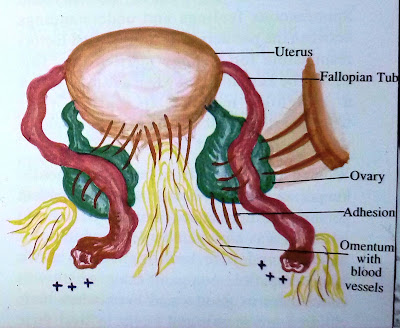 Diagramatic representation of Laparoscopic picture where
wedge Resection has been done

Reservation have been expressed with regard to wedge resection due to the development of severe post operative adhesion, which totally prevent egg pick up ending in test tube baby programme for the patients.