How the fetus or foetus develops?

As regards to how a woman conceives, it takes two to make three. The man makes his contribution in the form of sperms. The female produces the egg or ovum and these two unite to form the baby. The male produces about 60-120 millions of sperms in 1cc. of seminal fluid throughout the year whereas the female produces one egg only, once a month, and if there is occasion for the egg to unite with the sperm during intercourse, the woman becomes pregnant. The egg is produced around the 14th day of a woman's 28 days menstrual cycle. In an irregular cycle, the egg is produced 14 days before the menstrual flow. 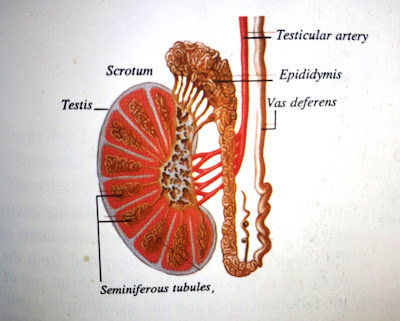 This sperms are produced by the 'Stem cells' in the testis and they are under the control of various hormones like Leutinising Hormone (LH), Follicle Stimulating Hormone (FSH) and Testosterone. The testosterone is produced by the leydig cells in the intercellular substance of the testis. The LH controls testosterone production. Sertoli cells form supporting cells, From the time of production  of sperms to the time of emission during intercourse, it takes about 60 days. The various stages of sperm maturation are: Sperm cells or Spermatogonia > Primary Spermatocytes > Secondary Spermatocytes > Spermatid > Spermatozoa. This process is called Spermatogenesis. 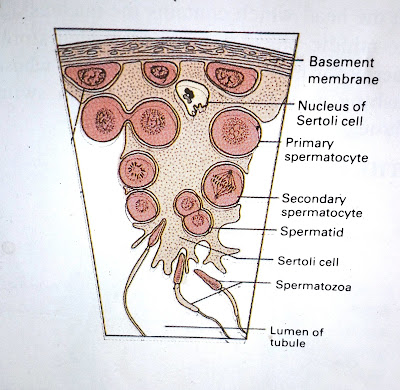 After the egg is liberated from the ovary, it is picked up by the fimbrial end of the fallopian tubes which is the lateral end of the tube having finger like processes. 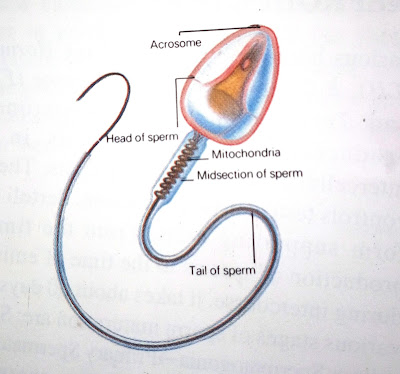 The sperm is so minute that it is visible only through a microscope. It is divided into 3 portions, viz. (1) the head which contains the nucleus, (2) the middle piece or the neck which stores energy for movement and (3) the tail whose lashing movements help the sperm swim through the vaginal canal secretion.


THE EGG OR OVUM 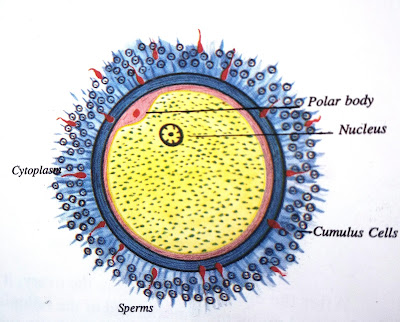 This is produced by the ovary in the female reproductive system. Egg is spherical in shape. The male cell gets attracted to the female cell and thus procreation is brought about. The semen gets deposited in the vagina and the sperms get entangled in the seminal fluid which becomes gelatinous i.e. it clots initially and later liquifers within half an hour. The millions of sperms then quickly start moving up the cervix into the uterine cavity and into the tubes, by lashing movements of the tail. After the egg is liberated from the ovary, it is picked up by the fimbrial end of the fallopian tubes and moves within the tubes by the peristaltic movements of the tubes along with the help of the cilia or hair like processes lining  the inner walls of the tube. 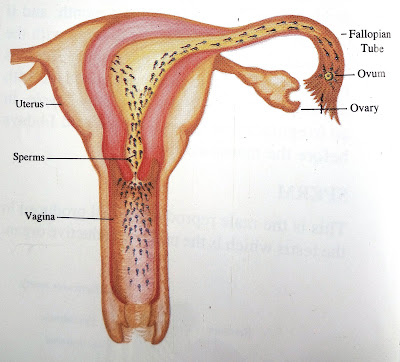 Under favourable conditions, the union of sperm and ovum occurs at the lateral end of the tube. The time taken for the sperm to reach the tubal end is roughly about 1 hour. One sperm penetrates the ovum, loses its tail and prevents further penetration by other sperms. The fertilized embryo undergoes cleavage (cell division) and travels down the tube to reach the uterus and gets implanted in the upper part of the uterus. The sperm once deposited in the vagina retains the capacity to fertilize the ovum only for 24 hours, and the ovum once released from the ovary, retains its capacity to be fertilized only for 8-12 hours. Hence, intercourse in and around this period of ovulation alone can lead to a healthy pregnancy.

There are instances where the sperms have been found to be alive in the uterus even after 4-5 days after the intercourse. But it has been proved by experiment on animals that fertilization by aged ovum and sperm leads to more congenital malformation of the newborn or missed abortion or empty sac syndrome. 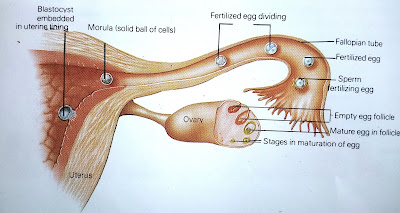 
Pregnancy itself is a miracle and how the sperms reach the egg, fertilize and then form an embryo is truly an amazing story!

About 2000 sperms out of the many deposited in the vaginal canal reach the fallopian tube and interestingly enough, only about a 100 sperms reach the vicinity of the egg out of which only one unites with the egg and develops into an embryo.

The total content of primary oocyctes (precursors of eggs) of both ovaries at birth are generally estimated as being between 300,000 and 500,000 but it is reduced during childhood so that at puberty the figure is at least halved. Of these not more than 500 are destined to mature during the individual's lifetime and the remainder will be lost by some form of degenerative process. 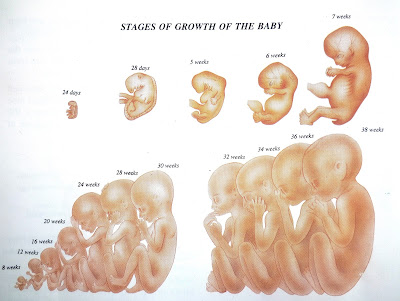