The Reader must be aware of the anatomy of the female genital organs primarily in order to appreciate the physiological functions of menstruation and reproduction. The Organs of reproduction can be divided into: 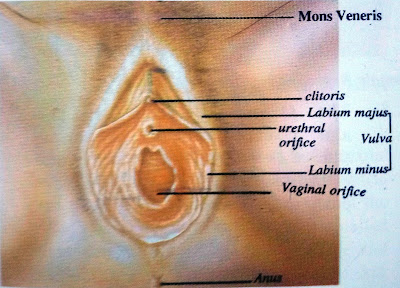 1. Mons Veneris: It is the pad of fat lying in front of the public bone which is normally covered by hair.

2. The Labia Majora and Minora:

a) The Labia majora are the two enlongated folds of skin projecting downwards and backwards from the mons veneris.

3. The Clitoris: This is the highly excitable erectile tissue in the female corresponding to the penis of the male and is situates on the most  anterior portion of the vulva and projects between the two folds of labia minora.

4. The Vestibule: This is the triangular surface which is bounded anteriorly by the clitoris, laterally by the labia minora and posteriorly by the anterior margin of the hymen. At the centre of the vestibule, is the urethra.

5. The Hymen: This is an incomplete septum of mucous membrane which closes the vaginal orifice. The hymen is usually ruptured at the first coitus and its intact presence is usally a sign of virginity. However, there are exceptions like sports women, dancers and those who indulge in heavy exercises.

The Internal genital organs: These consist of the vagina, Uterus, fallopian tubes and the Ovaries.

1. The Vagina: This is the muscular canal that connects the vulva to the uterus in which coitus takes place. This is situated between the bladder in front and the rectum behind. The Cervix i.e. the month of the uterus dips into the vaginal canal.

2. The Cervix: This forms a conical projection from the lower end of the uterus into the upper part of vagina. It opens during ovulation. The cervix has got cervical glands that secrete mucous like fluid which becomes thin and favourable at the time of ovulation to facilitate the sperms to swim up to meet the oocyte (Egg). 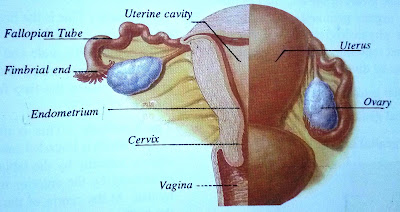 During the other times the cervix remains closed and has thick secretion which does not allow the sperms to go up. The cervix has an important role to play in fertility.

3. The Uterus: This is the hollow organ situated deep within the pelvis. Its is the most important organ since it shelters the baby and is the one that sheds its endometrium ( Which is the inner lining layer of the uterus) during the monthly periods. The uterus is made up of 2 parts i.e. the body and the neck or cervix.

4. Fallopian Tubes: These are two long thin tubes arising from the sides of the uterus measuring about 10-12cms. The lateral ends of the tubes are stretched out into finger like processes called fimbriae which lie near the ovaries.

5. The Ovaries: These are two almond-shaped structures which are situated on either side of the uterus (next to the fimbriae). The Ovary is the one that produces the ovum or the egg every month. 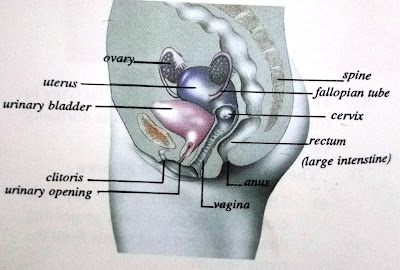 Slide View of the Uterus in the Pelvis

This mainly consists of the penis – the main organ of copulation, the testes in which the sperms (male reproductive cells) are produced and the scrotum that encloses the testes. 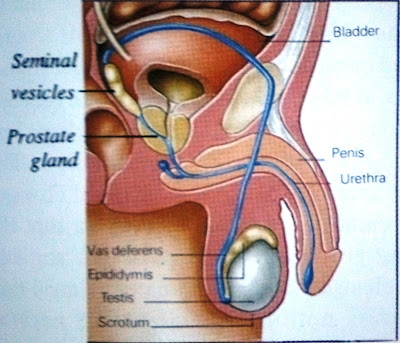 The Penis
This is the main organ involved in the sexual union with the female. It is a long cylindrical structure, soft and elastic arising from the public arch. The end of the organ is called glans penis which is conical in shape and contains the opening of the urethra. The skin over the penis is delicate and elastic and hairless except at the base. The skin covering the glans is called prepuce. The latter is removed in circumcision leaving the glans exposed. This organ during sexual excitement gets engorged and erectile.

This contains of a pendulous sac, with rugose skin and encloses the testes and their associated ducts and the lower part of the spermatic cord.

There are two testes placed external to the body in the scrotal sac. They are oval in shape. Absence of both the testes causes sterility and defective function is a cause of subfertility.
Increased temperature causes decreased spermatogenic function in the testis thereby giving rise to low sperm count and motility. Therefore in cases of Male Infertility one should look for varicosity of the veins in the testis wherein there is increased blood circulation. This increases the intratesticular temperature which leads to decreased production of sperms. Therefore testicular vein ligation forms an important part in the treatment of male infertility.
The mature sperms pass from the testis to the epididymis in a tightly coiled tube; from there into the spermatic cord (Vasdeferense) which opens into the urethra.  The seminal vesicles and the prostate glands which are situated beneath the urinary bladder around the urethra also empty their secretions into the urethra. The passage of sperms through the epididymis and vas help in sperm maturation and vitality.