I have been considering my next insulin pump choice for quite a long time, if not over a year now. With various insulin pumps available, and with the guarantee of additional to come in the following couple of years, I was reluctant to settle on a choice before the end of November regarding what to do. Be that as it may, with the vulnerability if my significant other's protection would change once more, we chose to simply ahead and make the buy. 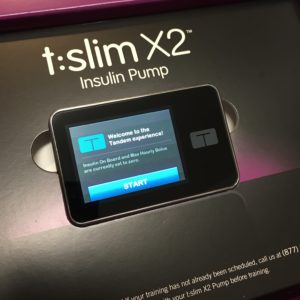 I ran with Tandem again after firmly taking after the entry of their t:slim X2 insulin pump. With the likelihood of interfacing with Dexcom's G5 transmitter, as well as having the capacity to do as such without sending in my pump for a substitution and without extra cost (according to their gaining's call), I truly couldn't see myself running with another insulin pump.

It's actual – I haven't had the best 4 years at first with Tandem, however in the wake of getting my last substitution (because of a broken screen) and seeing and encountering the new programming (which incorporated my genuinely necessary upgraded invert amendment that would permit me to pick regardless of whether the pump decreased my bolus in the event that I was beneath my objective yet over 70mg/dL), I was influenced more toward Tandem. At that point, obviously, the touch-screen had a calculate it as well, not due to it being "garish" or "with the circumstances" but since subsequent to utilizing my companion's Animas Vibe amid my pregnancy, I understood the amount additional time it took to scroll as opposed to tap the data I required into the pump.

Gracious, and the rechargeable variable is dependably a win in my book as I abhor purchasing batteries.

I additionally cherished that I could transfer the t:slim to Diasend, Tidepool, or t:connect, and do as such utilizing a standard miniaturized scale USB link rather than some favor wired dongle that I would never stay aware of.

Following a week hold up of entries and solicitations, my demand was affirmed and the t:slim X2 was transported and on it's approach to me. In truth, it took a week to get to me from Tandem, however that was my exclusive objection. Since I knew nothing had changed truly aside from a few upgrades to the glass and the Bluetooth radio inside, I declined preparing and felt free to snared everything Wednesday evening.

The Screen: The primary thing I saw and likely awed me the most was the screen. They had, indeed, rolled out a few improvements. I can played with Tandem's t:simulator application and wishing the screen could look as clear and "smooth" as it did in the test system. My companion giggled when I portrayed it as "creamier," however it was the main thing I could consider to clarify it.

While the show not exactly as splendid, it's comparative in shine to the first t:slim insulin pump before the product overhaul. In any case, the symbols and catches all give off an impression of being smoother, as though it has a higher pixel check (additionally most likely because of going from LCD to LED). It's an unobtrusive however, exceptionally pleasant change when found face to face (you can't generally catch it in photographs I've learned).

In any case, because of the screen transform, I've seen that it's somewhat harder to tap determinations on my pump.I've ended up tapping on things more than once to inspire it to initiate the choice on the screen. It's not an awful change, only one I'll need to get used to.

The T catch: Another decent change is the main catch – the T catch at the exceptionally top of the pump appears to have been made slightly harder to press, which is great. I was over and over again enacting the catch in my unique t:slim, and it could be squeezed without much compel by any means, however this one appears to have more imperviousness to it so one shouldn't have the capacity to effectively actuated. It certainly has to a greater extent a tick y feel to it.

Not Compatible with Diasend (yet): There's just a single disadvantage for me by and by that doesn't need to do with Tandem essentially or the t:slim X2, yet the transfer procedure. I didn't know until it was being conveyed to me that the X2 does not (as of now) transfer to Diasend. This was disastrous to me as I depend on the reports from Diasend to make my alterations. I've asked when it might be accessible, yet they have no evaluated time period other than to state "soon."

It does, notwithstanding, transfer to their program, t:connect. Be that as it may, since I can't transfer my meter (Contour Next USB) to their product, nor would I be able to import my Dexcom information, such a large amount of my information is absent.

I can likewise utilize Tidepool's product, be that as it may, I can't print the reports for my endo, who is not educated and doesn't subscribe to numerous uploader stages. Actually, even on the pumps that I've utilized that he had access to an online gateway, his office still would not transfer my pump, but instead, I needed to bring paper reports.

Along these lines, for the present, until Diasend discharges an overhaul to permit the t:slim X2, I'm physically logging my information into mySugr, my diabetes administration application on my iPhone. Which is absolutely alright at any rate since I've required some tweaking and physically logging can, now and again, pump clients to "see" where advance is required. It likewise kind of makes you more mindful of your own behavior (I mean, do I truly require that doughnut??) And, since it can consequently pull my Dexcom information from Apple Health, all I'm truly logging is my carbs, insulin, and a couple dinner labels.

In this way, I'm truly preferring the new X2, despite the fact that it just has minor updates from the t:slim pump. I am energized, however, at the possibility of remotely redesigning to include the Dexcom G5 programming ideally by mid-2017.