What is diabetes? What are the types of diabetes? 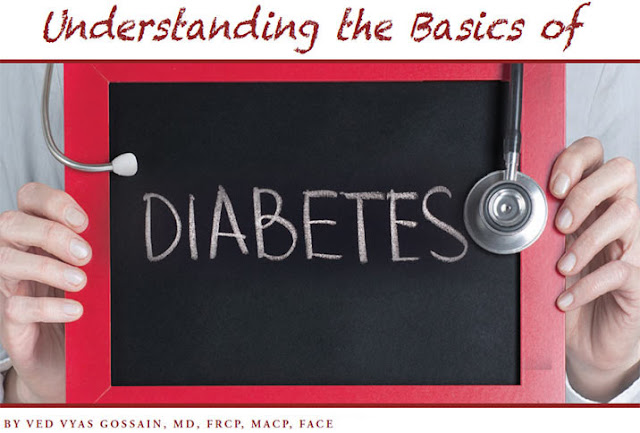 Diabetes is a number of diseases that involve problems with the hormone insulin. Normally, the pancreas (an organ behind the stomach) releases insulin to help your body store and use the sugar and fat from the food you eat. Diabetes occurs when one of the following occurs:

When the pancreas does not produce any insulin
When the pancreas produces very little insulin
When the body does not respond appropriately to insulin, a condition called "insulin resistance"
Diabetes is a lifelong disease. Approximately 18.2 million Americans have the disease and almost one third (or approximately 5.2 million) are unaware that they have it. An additional 41 million people have pre-diabetes. As yet, there is no cure. People with diabetes need to manage their disease to stay healthy.

The Role of Insulin in Diabetes

To understand why insulin is important in diabetes, it helps to know more about how the body uses food for energy. Your body is made up of millions of cells. To make energy, these cells need food in a very simple form. When you eat or drink, much of your food is broken down into a simple sugar called "glucose." Then, glucose is transported through the bloodstream to the cells of your body where it can be used to provide some of the energy your body needs for daily activities.

To keep your blood glucose levels from getting too low (hypoglycemia or low blood sugar), your body signals you to eat and releases some glucose from storage kept in the liver.

People with diabetes either don't make insulin or their body's cells are resistant to insulin, leading to high levels of sugar circulating in the blood, called simply high blood sugar. By definition, diabetes is having a blood glucose level of 126 milligrams per deciliter (mg/dL) or more after an overnight fast (not eating anything).

Type 1 diabetes occurs because the insulin-producing cells of the pancreas (called beta cells) are destroyed by the immune system. People with type 1 diabetes produce no insulin and must use insulin injections to control their blood sugar.

Type 1 diabetes most commonly starts in people under the age of 20, but may occur at any age.

Type 2 diabetes is the most common form of diabetes, affecting almost 18 million Americans. While most of these cases can be prevented, it remains for adults the leading cause of diabetes-related complications such as blindness, non-traumatic amputations, and chronic kidney failure requiring dialysis. Type 2 diabetes usually occurs in people over age 40 who are overweight, but can occur in people who are not overweight. Sometimes referred to as "adult-onset diabetes," type 2 diabetes has started to appear more often in children because of the rise in obesity in young people.

Some people can manage their type 2 diabetes by controlling their weight, watching their diet, and exercising regularly. Others may also need to take a pill that helps their body use insulin better, or take insulin injections.

Often, doctors are able to detect the likelihood of type 2 diabetes before the condition actually occurs. Commonly referred to as pre-diabetes, this condition occurs when a person's blood sugar levels are higher than normal, but not high enough for a diagnosis of type 2 diabetes.

Gestational diabetes is triggered by pregnancy. Hormone changes during pregnancy can affect insulin's ability to work properly. The condition occurs in approximately 4% of all pregnancies.

Pregnant women who have an increased risk of developing gestational diabetes are those who are over 25 years old, are above their normal body weight before pregnancy, have a family history of diabetes or are Hispanic, black, Native American, or Asian.

Usually, blood sugar levels return to normal within six weeks of childbirth. However, women who have had gestational diabetes have an increased risk of developing type 2 diabetes later in life.


What Are the Symptoms of Diabetes?

The symptoms of type 1 diabetes often occur suddenly and can be severe. They include:

#Increased thirst
#Increased hunger (especially after eating)
#Dry mouth
#Frequent urination
#Unexplained weight loss (even though you are eating and feel hungry)
#Fatigue (weak, tired feeling)
#Blurred vision
#Labored, heavy breathing (Kussmaul respirations)
#Loss of consciousness (rare)
#The symptoms of type 2 diabetes may be the same as those listed above. #Most often, there are no symptoms or a very gradual development of the above symptoms. Other symptoms may include:

How Is Diabetes Managed?

At the present time, diabetes can't be cured, but it can be managed and controlled. The goals of managing diabetes are to:

Keep your blood sugar levels as near to normal as possible by balancing food intake with medication and activity.

Maintain your blood cholesterol and triglyceride (lipid) levels as near their normal ranges as possible by avoiding added sugars and processed starches and by reducing saturated fat and cholesterol.

Control your blood pressure. Your blood pressure should not go over 130/80.
Slow or possibly prevent the development of diabetes-related health problems.
You hold the key to managing your diabetes by:

Planning what you eat and following a balanced meal plan

>Exercising regularly
>Taking medicine, if prescribed, and closely following the guidelines on how and when to take it
>Monitoring your blood sugar and blood pressure levels at home
>Keeping your appointments with your health care providers and having laboratory tests as ordered by your doctor


Many people have gotten rid of from Diabetes by this. See how & read the testimonials of succeeded people here. Then read this. It just might be save your life.